skip to main | skip to sidebar

A few days ago, a baby in New Mexico died--and the culprit was most likely a rare bacteria found in his formula. This is very sad and prompts me to write on the topic of Enterobacter sakazakii, the bacteria thought to be responsible.
What is Enterobacter sakazakii and where is it found?
Enterobacter sakazakii, also called E. sakazakii, is a type of bacteria most recently associated with the use of powdered infant formula in hospital neonatal units and the subsequent death of some premature infants. The bacteria is also found in the gut of humans and animals and the environment.
Who is at risk for the infection?
According to the US FDA, "premature infants and those with underlying medical conditions are at highest risk for developing E. sakazakii infection."(1) Several outbreaks of the infection have occurred in neonatal intensive care units worldwide. There is compelling evidence that the use of powdered infant formula had served as the source of the infection.
How could powdered infant formula contain bacteria?
According to the World Health Association, "Powdered infant formula is not a sterile product--even when manufactured to meet current hygiene standards. This means that it may occasionally contain pathogens that can cause serious illness."(2)
Bacteria can enter a food during processing in 2 ways--through the raw material the food is made from and through contamination through other means. A food can also be contaminated with bacteria when the food is prepared for eating--in this case, when the powdered formula is reconstituted with water. Bacteria can enter the formula through dirty water, a dirty bottle or nipple or dirty hands. Small amounts of bacteria can grow to larger amounts that can cause illness when held at room temperature too long.
What can be done to prevent an infection from E. sakazakii?
FOR MORE INFORMATION ABOUT BREASTFEEDING, SEE:
www.womenshealth.gov/breastfeeding/inc
(1) Health Professionals Letter on Enterobacter sakazakii Infections Associated with Use of Powdered (Dry) Infant Formulas in Neonatal Intensive Care Units. Food and Drug Administration. Center for Food Safety and Applied Nutrition. October 2002. www. cfsan.fda.gov/~dms/inf-ltr3.html
(2) Safe preparation, storage and handling of powdered infant formula-Guidelines. World Health Organization 2007. www.who.int/foodsafety/publications/micro/pif2007/en/
Posted by Bridget Swinney MS, RD at 10:16 AM 1 comment: 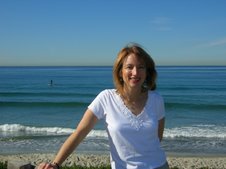 You can buy all my books at: www.healthyfoodzone.com

Welcome to the World of Baby Bites 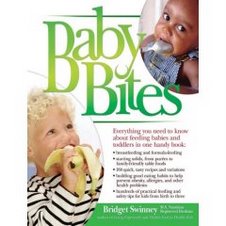 The Book that Has it All for Feeding Babies and Toddlers

Hello and Welcome to Baby Bites!

Feeding babies is so important, I thought the subject needed it's own blog spot. Here you'll find tips and tricks about feeding your baby and toddler--and info about other nutrition topics too. And because feeding and parenting are closely intertwined, you'll find some parenting tips as well.

There will be info from my book, Baby Bites, as well as from my other two books, Eating Expectantly and Healthy Food for Healthy Kids, little tips from me, and hopefully other moms and dads will chime in, too. I also like to recommend products--those that meet my criteria as a mom and registered dietitian.

Thanks and happy blogging!
Remember, You can now order my books on my website: www.healthyfoodzone.com 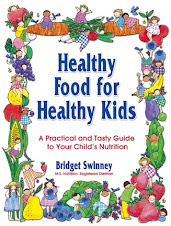 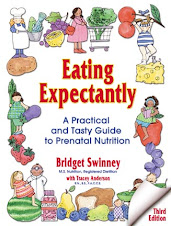 Bridget Swinney MS, RD
West Texas, United States
I'm a mom, registered dietitian and author of three books about how to eat healthy. I work with families to help them eat a healthier diet.